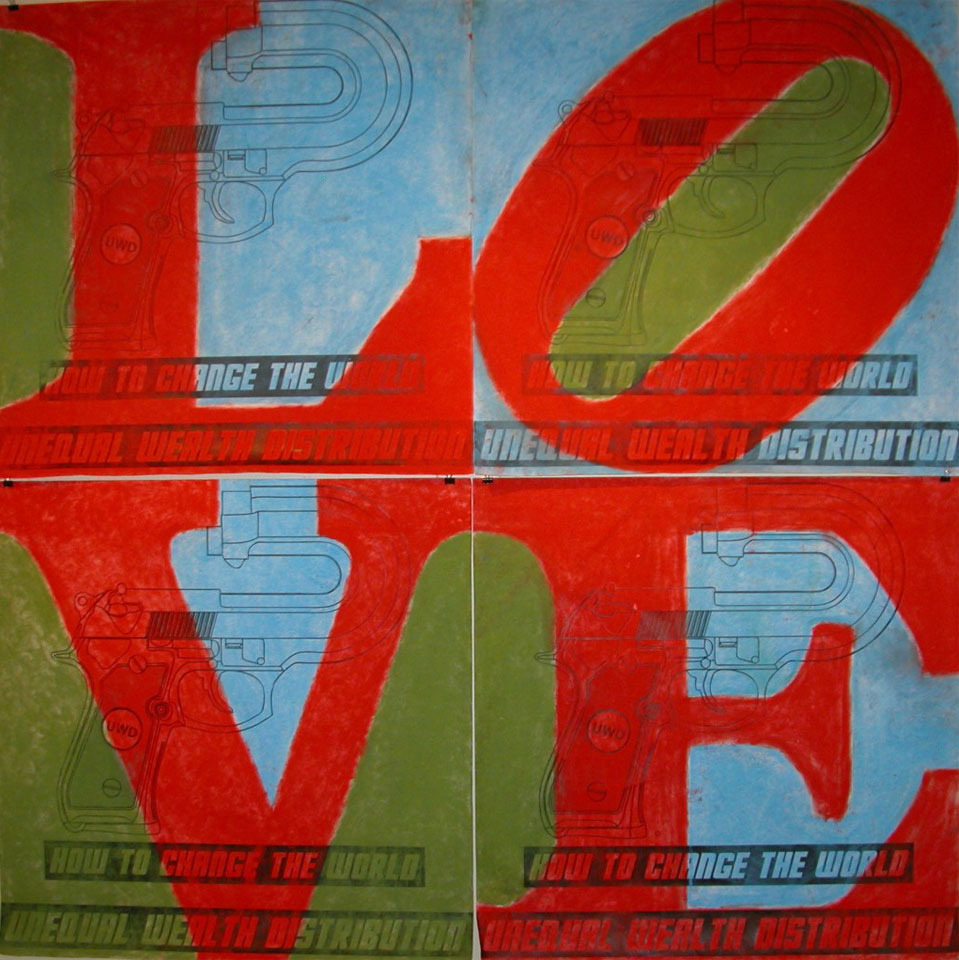 Left: Unequal Wealth Distribution (UWD). This is my rage against capitalism and the governmental and societal forces propelling it forward to our ultimate ruin. I was raised in the Sixties. I thought we had a chance to work together cooperatively for the greater good. Democracy holds that promise, but capitalism is the antonym of synergy – yet synergy is the antecedent to democracy. The appropriation of Robert Indiana’s iconic 1966 “LOVE” painting is the backdrop for a gun turned on all of us. Ironic on many levels.

"You cannot make a thriving, hence, survivable system out of the antonyms of synergy. Capitalism - the antithesis of a cooperative society -- rewards power, aggression, status, bigotry, lies, and consumption. At the same time, it denies the importance of knowledge, curiosity, wonder, and truth in favor of profit. The only thing that will change our current capitalist paradigm is a total eruption of consciousness -- and conscience. There must be a cataclysm of consciousness for us to create a new and thriving social and economic system based on cooperation and synergy.”

"We are not going to be able to operate our Spaceship Earth successfully nor for much longer unless we see it as a whole spaceship and our fate as common. It has to be everybody or nobody."

"Animals and humans suffer and die alike. If you have to kill your own hog before you ate it, most likely, you would not be able to do it. To hear the hog scream, to see the blood spill, to see the baby being taken away from its momma, and to see the look of death in the animal's eye would turn your stomach. So you get the man at the packing house to do the killing for you. In like manner, if the wealthy aristocrats who are perpetrating conditions in the ghetto actually heard the screams of ghetto suffering, or saw the slow death of hungry little kids, or witnessed the horror. . . If you can justify killing to eat meat, you can justify the conditions of the ghetto. I cannot justify either one."